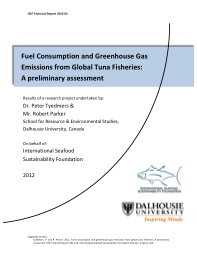 Contemporary tuna fisheries are heavily dependent on fossil fuels for propulsion, fishing and related activities. This reliance on fossil fuels not only contributes to a range of environmental concerns, most notably climate change, but also makes many tuna fisheries vulnerable to fluctuations in global oil prices. This report presents the results of a research project which aimed to quantify the fuel use intensity and partial carbon footprint of tuna fisheries in 2009, and, where possible, describe how fuel use varies by species targeted, location of fishing, and gears employed. Results are based on analysis of industry surveys reporting catch and fuel use data, representing ~19% of global landings of major tuna species in 2009. Analysis shows that there is a clear and marked difference in fuel use intensity between what can be considered two broad classifications of tuna fisheries: those targeting primarily skipjack and yellowfin tuna with purse seine, and those targeting albacore and bluefin tuna with longline, troll, and pole and line gears. The former group, using purse seine gear, was found to burn, on average, 368 litres of fuel per live weight tonne of landings, while the latter group of fisheries using other gears was found to burn, on average, between 1070 (longline) and 1490 (pole and line) litres per tonne. While it is not possible to discern from these data whether the lower fuel use intensity of the purse seine fisheries is the direct result of the type of gear used or of the species targeted, the findings are in line with previous studies that have found purse seine fisheries to be associated with relatively lower fuel use when compared to longlining. Aggregated and applied to the global tuna fishing fleet, we estimate that the total global tuna fishery, up to the dock, burned approximately 3 billion litres of fuel in 2009, and produced approximately 9 million tonnes of carbon dioxide equivalent greenhouse gas emissions from burning fuel. While the energy demands of tuna fisheries are substantial and, in some cases, much higher than other fisheries for direct human consumption, tuna products appear to be relatively less energy-intensive than many aquaculture- and livestock-derived sources of protein. Results of this study provide tuna fishermen, fisheries managers and other stakeholders with a first order estimate of the fuel use and carbon footprint of contemporary tuna fishing vessels, a baseline against which future performance can be measured, and insight into how changing fuel prices may affect different sectors of the tuna fishing fleet.