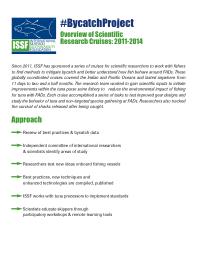 Since 2011, ISSF has sponsored a series of cruises for scientific researchers to work with fishers to find methods to mitigate bycatch and better understand how fish behave around FADs. These globally coordinated cruises covered the Indian and Pacific Oceans and lasted anywhere from 11 days to two and a half months. The research team worked to gain scientific inputs to initiate improvements within the tuna purse seine fishery to reduce the environmental impact of fishing for tuna with FADs. Each cruise accomplished a series of tasks to test improved gear designs and study the behavior of tuna and non-targeted species gathering at FADs. Researchers also tracked the survival of sharks released after being caught.